Get a Smalltalk up and running

Many of the concepts also apply other Smalltalks.


The first part is known as the "Virtual Machine"

More usually called the "VM".  This is the underlying engine that Smalltalk runs on.  It interfaces with the operating system of the computer that you are running the Smalltalk on, and also provides low-level services e.g. garbage-collection.

Cuis, Pharo and Squeak can all run on the same Virtual Machines, which run on MacOS, Windows and Linux.

Dolphin Smalltalk is designed to run on its own Virtual Machine, which runs on Windows.

The second part is called the "image" .

It holds everything that Smalltalk knew about, and all information relevant to running the Smalltalk installation.

The image file can be considered to be a collection of all information about a particular installation of  Smalltalk from just before it went into hibernation.


A little bit about each Smalltalk, and platform-specific notes

Squeak has given rise to both Pharo and Cuis, and also both the Seaside and AidaWeb web applications frameworks, along with much else.

The Scratch graphical programming language is written in Squeak, for example.

A lot of work goes in to getting Squeak running fast on the Raspberry Pi , because Scratch is written in Squeak. Scratch is a key package for teaching children to program, and the Rasberry Pi is a platform designed for teaching children to program. This work is done so that Scratch will run fast on the Pi, but it has a very useful side-effect for people who want to use Smalltalk on the Pi.

This makes it a good candidate for understanding a Smalltalk from top to bottom. Potentially it might lead to speedy performance.

Pharo is a fork of Squeak where the focus is on extending the functionality and ability of Squeak, without much regard to backward compatibility.  Considerable effort goes in to making sure that Pharo always remains a capable platform for the Seaside web server.

Pharo evolves rapidly, with vast majority of the additional functionality added by academic computer science research groups.  Nonetheless, the Pharo management team intend it also to be a useful platform for commercial application developments - as can be seen by the effort that goes into keeping the GUI and desktop themes looking clean and professional.

Cuis, Pharo and Squeak can all run on the same Virtual Machines, which run on MacOS, Windows and Linux.

Squeak 5.0 includes extensive optimisations for when it runs on the Raspberry Pi.

Dolphin Smalltalk is designed to run on its own Virtual Machine, which runs on Windows.

The key advantages are that Dolphin is designed to provide a Windows native look-and-feel; and a working system can be packaged up as a .exe install file. This means there is no learning curve for Windows end-users when they are installing an end-user app written in Dolphin Smalltalk.

Dolphin Community Edition cannot store code and classes to repositories in the cloud, or automatically retrieve packages from the internet.  Downloading packages that other people have already written for you to use from the internet is really useful as you start out. So you'd be better to download Squeak or Pharo, to start out with - unless you really want native look-and-feel from day 1.

Downloading packages from the internet is available in the paid-licence version of Dolphin.  I have not yet used this, so cannot vouch for how well it works.

So unless you want to learn only Windows-GUIs, I personally advise you to start on a different Smalltalk, and then later come back and learn the Windows-GUI facilities in Dolphin, once you are used to Smalltalk.

If you want to start writing web applications as you learn, then you can use a package called Seaside, which has a once-click installer for Pharo and Seaside, all in one step.

Seaside will also run on Squeak, but I don't know of any current All-in-one installer for it.

Cuis, Pharo and Squeak all use the MIT licence.  This allows commercial use, and is also GPL-compatible.

Dolphin's licence allows you to distribute the DLLs and the Dolphin VM as an integral part of executable applications created by you using Dolphin Smalltalk.

All of the cross-platform Smalltalks can be installed as a 'portable' installation.  You can copy the installed folder to anywhere on your PC and the Smalltalk will still run. The folder contains all the necessary code and .dlls to run successfully.

Cuis currently has you download the Smalltalk VM and the Cuis image separately. Probably best to start with one of the others, then come back to Cuis once you have got the hang of  VMs and Images.

The Cuis Image is available from
https://github.com/Cuis-Smalltalk

Any Squeak VM should work with Cuis. 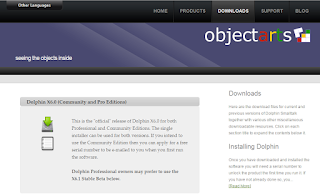 This downloads a .exe file.   (And the first time it runs, it will prompt you to email for a (zero-cost) Community edition licence number).

Once you have a little experience with VMs and images, you can download the latest Pharo 5.0 development image from  http://files.pharo.org/get-files/50/pharo.zip 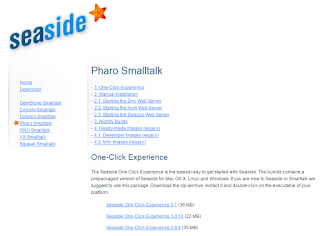 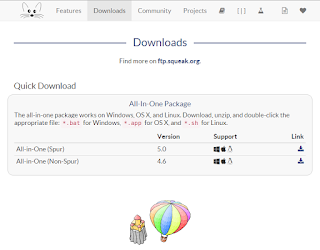 "Spur" / "Non-Spur" refers to the Virtual Machine (VM) included in the download.  Cog is currently the most prevalent VM in the Squeak/Pharo/Cuis worlds.

To start A Smalltalk

Once you have the files unzipped and installed on your computer:

On Windows
Open the folder with the VM in it.
Drag the Cuis .image file you want to use and drop it on the VM


To be determined. If anyone knows how, please let me know, and I'll include it here.

On Windows
Open the folder you have installed Dolphin to.
Drag the 'Professional (Fresh Install).img' file and drop it on Dolphin.exe

on Windows
Open the folder you have unzipped Pharo to.
drag the .image file you want to use and drop it on Pharo.exe

On Linux
Move to the folder you have unzipped Pharo to
In a shell or terminal window, type:
./PharoS Pharo.image &

on Windows
Open the folder
Double-click on Pharo.exe

On Linux
To be determined. If anyone knows how, please let me know, and I'll include it here.

on Windows
Open the folder you have unzipped Squeak to.
Double-click on squeak.bat

on Linux
navigate into the Squeak folder
In a shell or terminal window, type:
bash squeak.sh

To be determined. If anyone knows how, please let me know, and I'll include it here.
I imagine you double-click on Squeak-5.0-All-in-One.app